“We tend to think of technological advances as destroying what’s gone before, but that doesn’t usually happen. This could lead to a different way of making music.”
– Jarvis Cocker, former Pulp frontman, solo artist, writer and broadcaster

In recent years, the development of music technology has tended towards incremental changes, iterating on existing approaches to sound synthesis and refining tools such as sequencers and effect plugins. In some ways the industry occupies an almost contradictory space, soaking up whatever CPU power that is available often to better run simulations of the retro gear of the ‘70s and ‘80s. Companies such as Korg, Roland and Behringer, who recently announced the hugely competitively priced Crave, a £150 semi-modular analogue synth, are pushing their businesses forward by looking backwards.

Into this mix steps the disruptive technologies of AI and machine learning. Can these be used to convincingly simulate the creative process of an accomplished performer or composer?

In May 2017 at the Future of Go summit, the AI AlphaGo now famously presented its human opponent with a move so entirely unexpected, it shocked players of the game and resulted in a re-evaluation of how it could be played. Sam Potter from the Future Technologies in Music panel at the Science Museum described the impact of this event.

“This one move it did was so strange, unique and bizarre and creative that it opened up a whole new part of the game and our understanding of how to play.”

Neural networks are capable of reframing possibilities and moving outside of traditional expectations, but the nature of the reinforced learning approach means it necessarily does so opaquely; the process that leads to the result is inherently obscured and unpredictable.

Starting with Google DeepMind’s Wavenet, there have been various attempts to harness the potential of machine learning in the sound and music fields. Creating believable speech is the auditory equivalent of the uncanny valley phenomenon, as it demands both a realistic synthetic model of how speech sounds but also the intonation – how it’s performed. Encoding contextually appropriate inflections is a massive challenge. We’re often alerted to the generated nature of synthetic speech because of our sensitivity to inaccuracies in the speed, pitch or general delivery of the words. Wavenet and Microsoft’s neural network-powered speech generation demos use algorithms that have been trained on real human speech which enables the synthesis model to create a considerably more convincing performance, surpassing traditional speech synthesis methods.

Leading on from Wavenet, Google’s Magenta team has used Tensorflow, a GPU accelerated machine learning library, to experiment with building a synthesiser. NSynth (Neural Synthesizer) analyses pairs of existing sounds to construct a new instrument that is related but clearly different from its parents. The encoder stage looks at the quality and characteristics of the source instruments as well as their temporal nature, to produce a result that would be difficult to create by hand using traditional synthesis methods.

In the 1990s, SSEYO’s Koan software found fame when Brian Eno used it to create his floppy disc-based album, ‘Generative Music 1’. It was an early example of composition where the artist remained free to use their creative judgement to select, edit, arrange and augment fragments of ideas that were suggested by the program. Whereas Koan was purely algorithmic, relying on individual hand-crafted generators that approximated a limited range of common music forms, Amper Music and IBM’s Watson Beat can generate music by analysing the ‘grammar’ of real musical phrases and performances, thanks to the processing power behind machine learning tools such as Magenta. This creates music that, if not yet entirely convinces, comes ever closer to the musical equivalent of the Turing test.

“The idea of an AI making effective music that we like? Brian Eno puts this at around six or seven years.” – Sam Potter, musician and author

It is this performance aspect of machine learning where the greatest potential perhaps lies. In the game No Man’s Sky, we used a physically modelled vocal tract to create the sounds of the procedurally generated creatures. However to sound at all convincing, the synthesiser needed to be performed, similar to playing an instrument. Using an algorithmic method to drive the performance,  such as Perlin noise, translated poorly to the timed-based audio domain resulting in the creatures sounding robotic and stilted. Our solution of driving the vocals using a MIDI-based library of performance-captured phrases worked adequately enough, but to have had the ability to learn and then extrapolate different emotional states through a process of training based on a wide variety of source material would have been a far preferable scenario.

It’s not just in the areas of sound generation or music performance where these technologies are having an impact. Mastering is the last stage of mixing before the music is distributed, where the track has a range of DSP effects applied, such as compression and EQ, to give the music its final polish. Businesses such as the music mastering and distribution company LANDR uses machine learning to enable artists to choose a mastering style to best match the genre of the music being processed, the styles being derived from a process of training based around existing material.

The uses of machine learning in audio production are impressively varied, from creating new sounds, coming up with human-like performances through to the final preparation. What these tools have in common is the ability to augment the creative process, rather than supplant it, to offer new opportunities, all the while relying on the artist to form their own creative decisions. 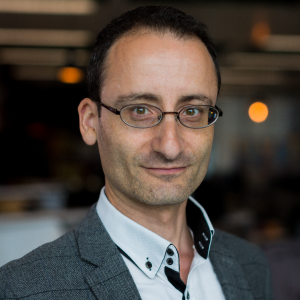 Paul is a composer, sound designer and audio director and through his company Earcom he has worked on over forty games, including No Man's Sky for Hello Games. He is also audio director for Microsoft's Lift London studio and has sound designed multiple HoloLens and VR projects. Paul is also an expert in generative audio and through The Sound Agency has soundscaped many retail spaces including Harrods, Helskini Airport and Brent Cross shopping centre.

Earlier this month Imagination Technologies picked up two awards for its recently launch IMG Series 4 neural network accelerator (NNA). Our NNA is no stranger to awards, with the design team behind the Series2 NX and the NNA itself picking up gongs for its groundbreaking performance. The Series 4 takes things to new levels, with its scalable architecture offering 500 TOPS of performance, and even beyond.

Taking the HyperLane with IMG A-Series

Inside every A-Series, from the smallest to the very largest are eight individual hardware control lanes, each isolated in memory, enabling different tasks to be submitted to the GPU simultaneously, for fully secure GPU multitasking. We call it HyperLane Technology.

Making Kynisys: how we’re building the future of AI

Kynisys is a new AI marketplace for edge compute that offered toolsets and all the building blocks that an edge AI system integrator needs. It’s an easy-to-use platform to create, test and deploy edge AI in less than a day; putting the power in the hands of those who have to solve “edge problems”.